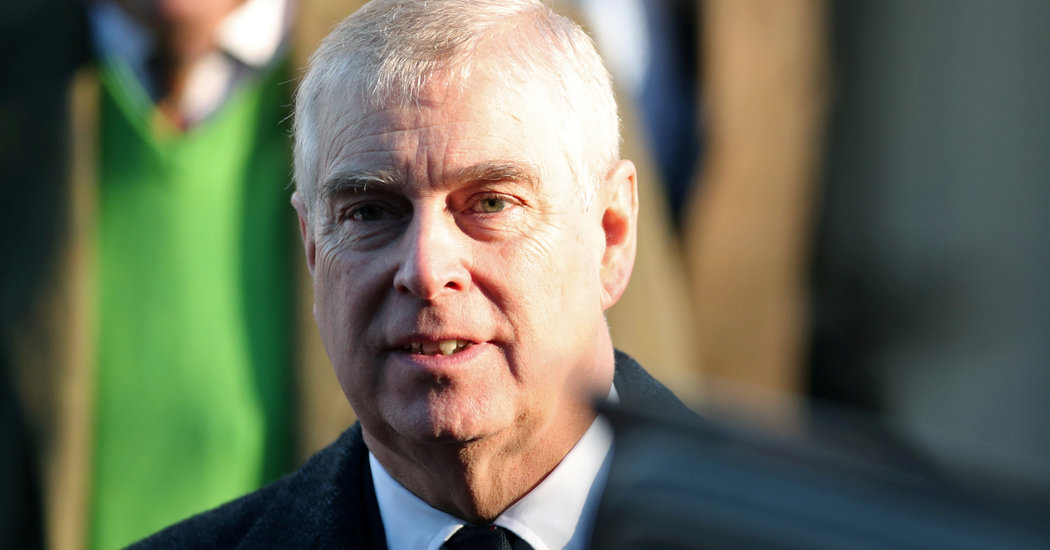 WASHINGTON — Prince Andrew’s lawyers had discussions with a Washington lobbyist with ties to the Trump administration about the possibility of assisting the prince with fallout from his relationship with the disgraced financier Jeffrey Epstein.

Lawyers from the London-based firm Blackfords consulted the lobbyist, Robert Stryk, who represents international figures with sensitive legal or diplomatic issues, in recent weeks about Prince Andrew’s situation, according to a person familiar with the circumstances.

Mr. Stryk has a history of taking on clients with unsavory reputations. But he expressed discomfort about the possibility of assisting Prince Andrew, and talks about the potential representation appear to have fizzled, according to the person familiar with the situation.

It is not clear precisely what type of assistance Blackfords might have been seeking from Mr. Stryk, who is not a lawyer, or what he could do to help Prince Andrew. Nor is it clear whether Blackfords has reached out to other Washington lobbyists or consultants about the possibility of working on the issue.

Neither Mr. Stryk nor any other American consultant is listed as having registered with the Justice Department to represent Prince Andrew, which could be required under the Foreign Agents Registration Act if a consulting arrangement had been reached involving lobbying or public relations.

Blackfords has been representing Prince Andrew, the Duke of York, in a contentious back-and-forth with federal prosecutors in New York who are investigating allegations of sex trafficking and other crimes by Mr. Epstein and his associates.

Prince Andrew, 60, has not been charged in the case.

But in August, Virginia Roberts Giuffre accused the prince of having sex with her three times when she was 17 years old after she was connected to him by Mr. Epstein.

The prince denied her claim in an interview with the BBC in August and sought to minimize his long friendship with Mr. Epstein, who killed himself last summer at a federal jail in Manhattan while awaiting trial on sex trafficking and conspiracy charges. He had met Mr. Epstein through Ghislaine Maxwell, a British socialite and Mr. Epstein’s onetime girlfriend, who was arrested on Thursday and charged with luring multiple underage girls into Mr. Epstein’s orbit.

Prince Andrew had indicated a willingness to help American law enforcement officials with their investigations late last year. But since then, prosecutors in New York have publicly criticized him on multiple occasions for offering “zero cooperation” and for stonewalling.

The prince’s lawyers at Blackfords shot back in a statement issued early last month. They accused Geoffrey S. Berman, who had served as the United States attorney in Manhattan until being fired late last month, of making “inaccurate” statements about Prince Andrew, suggesting that the prosecutor and his colleagues were “perhaps seeking publicity rather than accepting the assistance proffered.”

Mr. Stryk, who is well connected in Trump administration foreign policy circles, owns a company called Sonoran Policy Group, which casts itself as “global private diplomacy” firm. He has developed a reputation in recent years for taking on clients other Washington lobbyists and consultants shy away from.

This year alone, his firm has signed contracts to represent a jailed Saudi prince who had fallen out of favor with his country’s powerful de facto leader, Crown Prince Mohammed bin Salman, as well as the administration of President Nicolás Maduro of Venezuela, which the Trump administration considers illegitimate.

Mr. Stryk represents Isabel dos Santos, the daughter of Angola’s former president who is accused of embezzling millions of dollars from a state oil company she once headed. And he had represented the government of the former Congolese president Joseph Kabila, which had faced American sanctions for human rights abuses and corruption.