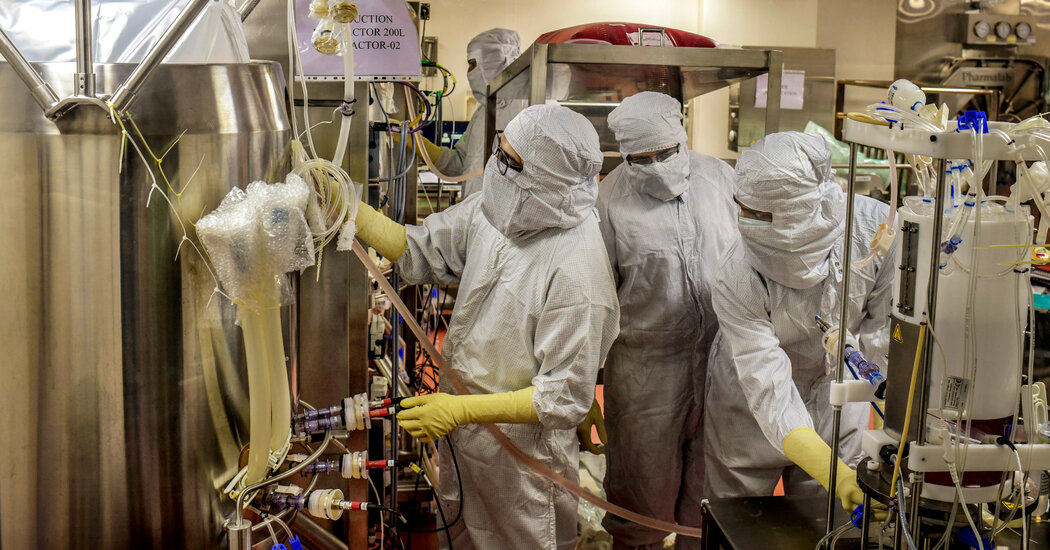 PUNE, India — In early May, an extremely well-sealed steel box arrived at the cold room of the Serum Institute of India, the world’s largest vaccine maker.

Inside, packed in dry ice, sat a tiny 1-milliliter vial from Oxford, England, containing the cellular material for one of the world’s most promising coronavirus vaccines.

Scientists in white lab coats brought the vial to Building 14, carefully poured the contents into a flask, added a medium of vitamins and sugar and began growing billions of cells. Thus began one of the biggest gambles yet in the quest to find the vaccine that will bring the world’s Covid-19 nightmare to an end.

The Serum Institute, which is exclusively controlled by a small and fabulously rich Indian family and started out years ago as a horse farm, is doing what a few other companies in the race for a vaccine are doing: mass-producing hundreds of millions of doses of a vaccine candidate that is still in trials and might not even work.

But if it does, Adar Poonawalla, Serum’s chief executive and the only child of the company’s founder, will become one of the most tugged-at men in the world. He will have on hand what everyone wants, possibly in greater quantities before anyone else.

His company, which has teamed up with the Oxford scientists developing the vaccine, was one of the first to boldly announce, in April, that it was going to mass-produce a vaccine before clinical trials even ended. Now, Mr. Poonawalla’s fastest vaccine assembly lines are being readied to crank out 500 doses each minute, and his phone rings endlessly.

National health ministers, prime ministers and other heads of state (he wouldn’t say who) and friends he hasn’t heard from in years have been calling him, he said, begging for the first batches.

“I’ve had to explain to them that, ‘Look I can’t just give it to you like this,’” he said.

With the coronavirus pandemic turning the world upside down and all hopes pinned on a vaccine, the Serum Institute finds itself in the middle of an extremely competitive and murky endeavor. To get the vaccine out as soon as possible, vaccine developers say they need Serum’s mammoth assembly lines — each year, it churns out 1.5 billion doses of other vaccines, mostly for poor countries, more than any other company.

Half of the world’s children have been vaccinated with Serum’s products. Scale is its specialty. Just the other day, Mr. Poonawalla received a shipment of 600 million glass vials.

But right now it’s not entirely clear how much of the coronavirus vaccine that Serum will mass-produce will be kept by India or who will fund its production, leaving the Poonawallas to navigate a torrent of cross-pressures, political, financial, external and domestic.

India has been walloped by the coronavirus, and with 1.3 billion people, it needs vaccine doses as much as anywhere. It’s also led by a highly nationalistic prime minister, Narendra Modi, whose government has already blocked exports of drugs that were believed to help treat Covid-19, the disease caused by the coronavirus.

Adar Poonawalla, 39, says that he will split the hundreds of millions of vaccine doses he produces 50-50 between India and the rest of the world, with a focus on poorer countries, and that Mr. Modi’s government has not objected to this.

But he added, “Look, they may still invoke some kind of emergency if they deem fit or if they want to.”

The Oxford-designed vaccine is just one of several promising contenders that will soon be mass-produced, in different factories around the world, before they are proven to work. Vaccines take time not just to perfect but to manufacture. Live cultures need weeks to grow inside bioreactors, for instance, and each vial needs to be carefully cleaned, filled, stoppered, sealed and packaged.

The idea is to conduct these two processes simultaneously and start production now, while the vaccines are still in trials, so that as soon as the trials are finished — at best within the next six months, though no one really knows — vaccine doses will be on hand, ready for a world desperate to protect itself.

American and European governments have committed billions of dollars to this effort, cutting deals with pharmaceutical giants such as Johnson & Johnson, Pfizer, Sanofi and AstraZeneca to speed up the development and production of select vaccine candidates in exchange for hundreds of millions doses.

AstraZeneca is the lead partner with the Oxford scientists, and it has signed government contracts worth more than $1 billion to manufacture the vaccine for Europe, the United States and other markets. But it has allowed the Serum Institute to produce it as well. The difference, Mr. Poonawalla said, is that his company is shouldering the cost of production on its own.

But Serum is distinct from all other major vaccine producers in an important way. Like many highly successful Indian businesses, it is family-run. It can make decisions quickly and take big risks, like the one it’s about to, which could cost the family hundreds of millions of dollars.

Mr. Poonawalla said he was “70 to 80 percent” sure the Oxford vaccine would work.

Unbeholden to shareholders, the Serum Institute is steered by only two men: Mr. Poonawalla and his father, Cyrus, a horse breeder turned billionaire.

More than 50 years ago, the Serum Institute began as a shed on the family’s thoroughbred horse farm. The elder Poonawalla realized that instead of donating horses to a vaccine laboratory that needed horse serum — one way of producing vaccines is to inject horses with small amounts of toxins and then extract their antibody-rich blood serum — he could process the serum and make the vaccines himself.

He started with tetanus in 1967. Then snake bite antidotes. Then shots for tuberculosis, hepatitis, polio and the flu. From his stud farm in the fertile and pleasantly humid town of Pune, Mr. Poonawalla built a vaccine empire, and a staggering fortune.

Capitalizing on India’s combination of cheap labor and advanced technology, the Serum Institute won contracts from Unicef, the Pan American Health Organization and scores of countries, many of them poor, to supply low-cost vaccines. The Poonawallas have now entered the pantheon of India’s richest families, worth more than $5 billion.

Horses are still everywhere. Live ones trot around emerald paddocks, topiary ones guard the front gates, and fancy glass ornaments frozen in mid-strut stand on the tabletop of Serum’s baronial boardroom overlooking its industrial park, where 5,000 people work.

Inside the facility producing the coronavirus vaccine candidate, white-hooded scientists monitor the vital signs of the bioreactors, huge stainless steel vats where the vaccine’s cellular material is reproduced. Visitors are not allowed inside but can peer through double-paned glass.

“These cells are very delicate,” said Santosh Narwade, a Serum scientist. “We have to take care with oxygen levels and mixing speed or the cells get ruptured.”

His voice was jumpy with excitement.

“We all feel like we’re giving the solution to our nation and our world,” he said.

Initial trial results of the Oxford-designed vaccine showed that it activated antibody levels similar to those seen in recovering Covid-19 patients, which was considered very good news.

Serum has already produced millions of doses of this vaccine for research and development, including large batches for the ongoing trials. By the time the trials finish, expected around November, Serum plans to have stockpiled 300 million doses for commercial use.

But even if this vaccine fails to win the race, the Serum Institute will still be instrumental. It has teamed up with other vaccine designers, at earlier stages of development, to manufacture four other vaccines, though those are not being mass produced yet.

And if all of those fail, Mr. Poonawalla says he can quickly adapt his assembly lines to manufacture whatever vaccine candidate does work, wherever it comes from.

“Very few people can produce it at this cost, this scale and this speed,” he said.

Under the AstraZeneca deal, Serum can make 1 billion doses of the Oxford vaccine for India and lower- and middle-income countries during the pandemic and charge an amount that is no more than its production costs.

After the pandemic passes, Mr. Poonawalla expects that he will be able to sell the vaccine at a profit — if it works — but his biggest concern is the near term and covering his cash flow. He estimates that he is spending around $450 million to mass-produce the Oxford vaccine.

Many of his expenses might never be recouped, like the costs for the vials holding the vaccine and the chemicals used in the process. For the first time, the Poonawallas say they are considering turning to sovereign wealth or private equity funds for help.

Contrast that with the deals made under President Trump’s Warp Speed project, and the similar ones in Europe. In the scramble to secure hundreds of millions of doses for their people, richer countries have already paid or committed to pay drug companies handsomely to offset the risks of mass-producing a vaccine candidate that might not work and end up being thrown out.

What this spells is “vaccine nationalism,” said Dr. Olivier Wouters, a health policy professor at the London School of Economics.

Analysts said it was likely that Serum would eventually get some financial help from the Bill & Melinda Gates Foundation, which supports global immunization programs, or maybe the Indian government. Both declined to comment.

But any deal will probably be far smaller than what the big pharmaceutical companies have landed. Another difference is that those companies are vaccine developers and producers. Serum’s role, at least for the Oxford vaccine, is purely production.

Either way, Mr. Poonawalla said he felt an obligation to take this risk.

“We just felt that this was our sort of moment,” he said.

Since Adar Poonawalla took over as Serum’s chief executive from his father in 2011, the company has expanded into new markets, pushing revenues to more than $800 million.

A few years ago, the Poonawallas decided to buy the former American consulate building in Mumbai, which used to be a maharajah palace, for $113 million — for a weekend retreat. They have more Rolls-Royces and Ferraris than you can shake a stick at, and a Batmobile.

Adar Poonawalla acknowledged that his family was better known for “being seen in some fancy car or a jet or whatever,’’ than making lifesaving vaccines.

“A lot of people didn’t even know in India what the hell I did,” he said. “They thought, ‘Oh, you do something with horses or something, you must be making money.’”

Mr. Poonawalla senses this is about to change.

He is confident that the Oxford vaccine his gleaming stainless-steel machines are churning out has the best shot of working. If it does, he plans to roll up his sleeve and brace for an injection.

“It would be ridiculous,” he said, “if I spent all this money, committed to everything, and I didn’t take it myself.”