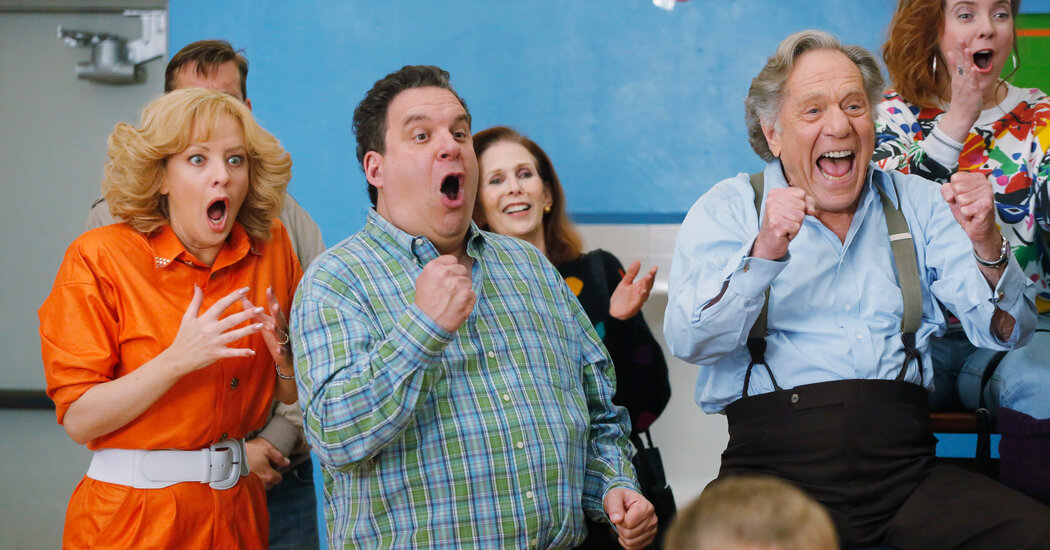 In the TV business, hit shows inevitably inspire imitators, but ABC’s programming department maybe went a bit too crazy at the copy machine after “Modern Family” became a smash in the fall of 2009. Before long, the network had added “The Middle,” “The Neighbors,” “Trophy Wife,” “Fresh off the Boat,” “black-ish,” “The Real O’Neals,” “Speechless” and “The Kids Are Alright” — all sitcoms about the complications of domestic life, from different perspectives. Black? Asian-American? Catholic? Gay? Disabled? Stuck in the ’70s? From outer space? For much of the 2010s, ABC gave multiple kinds of families a prime-time platform.

After seven seasons and counting, “The Goldbergs” (available to stream on Hulu with recent episodes on ABC’s website) is one of the last of the shows from this era still airing. Next to “Modern Family” and “The Middle,” it’s the one that’s run the longest, perhaps because it’s a distillation of the best parts of the ABC family sitcom formula, combining heartfelt sentiment and cranked-up farce.

Most of the shows in that big 2010s ABC wave had one unique hook. “The Goldbergs” has two: It’s about a Jewish family, and it’s set in the 1980s. Based on the creator Adam Goldberg’s own childhood in the Philadelphia suburb Jenkintown, the series is narrated by the comedian Patton Oswalt as the grown-up Adam, who tells semi-true stories from an era he calls “1980-something.” Some episodes are about life in the time of John Hughes movies and video arcades. Others are about living in a household with a smothering mother, an emotionally distant father and bickering siblings.

When “The Goldbergs” debuted in 2013, some early reviews dismissed the series as too loud, too busy and too beholden to nostalgia. But to me it’s a finely tuned comic contraption, with an ace multigenerational cast. The great George Segal plays the family’s easygoing playboy grandfather, while the improv comedy veterans Wendi McLendon-Covey (“Reno 911!”) and Jeff Garlin (“Curb Your Enthusiasm”) play the parents, Beverly and Murray. Three impressive young actors (Sean Giambrone as Adam, Troy Gentile as Barry and Hayley Orrantia as Erica) each bring an outsize, offbeat energy to the brash, neurotic Goldberg kids.

That cast — even more than the ’80s references — is what really makes “The Goldbergs” special. They work together like gears in a cuckoo clock.

What the Skeptics Miss

Humor is subjective, granted. But as someone who appreciates a sturdily crafted, snappily delivered joke, I’ve always found “The Goldbergs” to be one of TV’s most consistently funny sitcoms. When the cast really gets revved up — aided by editing that cuts quickly between their broad gestures and the punchy dialogue — it’s like watching skilled acrobats flipping wildly through the air and landing gracefully.

In one episode this past season, the family gathered for a “game night” that devolved quickly into an argument over what to play, accompanied by a rehashing of past grievances that kept getting more and more preposterous. The one-liners flew by at a dizzying pace for three solid minutes. (Reminded he once angrily kicked an Operation board so hard he needed an actual operation, the bullheaded Barry cheerfully noted, “They sewed my toe back on, and now I have to think extra-hard when I want to wiggle it!”)

Even mediocre “Goldbergs” episodes usually feature one or two scenes at the level of the game night repartee. The show has been a weekly gift for fans of old-fashioned zingers.

One of the biggest knocks against “The Goldbergs” is that its version of “the ’80s” is more a vague concept than the authentic portrait of a historical decade. Adam Goldberg and his writers consciously choose to skip back in forth in the cultural timeline while telling an otherwise chronological story about three Jenkintown teens. One week the characters will be obsessed with the 1985 movie “Commando,” starring Arnold Schwarzenegger. A few weeks later they’ll all be talking about “Dead Poets Society,” from 1989. It’s a mess.

This lack of interest in actual dates does matter. Goldberg’s writers have shown a genuine affection and understanding for ’80s pop culture, but they’ve unintentionally been disrespecting that culture’s larger narrative. Music, TV, movies and games evolve with their times, affected by one another and by sociopolitical trends. “The Goldbergs” doesn’t properly represent any of those particulars. It’s a homogenized blend of all of its influences, much sweeter and smoother than the times that produced them.

But ultimately, the vagueness works for this show. “The Goldbergs” is meant to be a little 22-minute shot of joy and warmth. And it’s pretty potent.

How Long Can the Show Go On?

It’s somewhat surprising that “The Goldbergs” keeps getting renewed. It has never finished a season in the Nielsen Top 20. While the series is available in full on Hulu (and airs nearly every day in syndication), it rarely gets talked about on Twitter or turned into memes.

And frankly, a year ago I might’ve said “The Goldbergs” had run its course. How many times can Adam get obsessed with some ’80s movie? How often can Beverly promise to give her kids more space? Do we need to hear Oswalt end yet another episode with a maudlin, “That’s the thing about family …”?

But even though the actors playing the younger Goldbergs stopped looking like fresh-faced teenagers years ago, I’m not ready for them or anyone else in the cast to disappear from my TV. They’re uniquely talented and funny, and I’ll miss them when they’re gone.

And if I’m being honest, seeing them is a welcome reminder of the days when ABC aired a half-dozen “Goldbergs”-like sitcoms each week. It makes me feel nostalgic — not for the 1980s but for the 2010s.