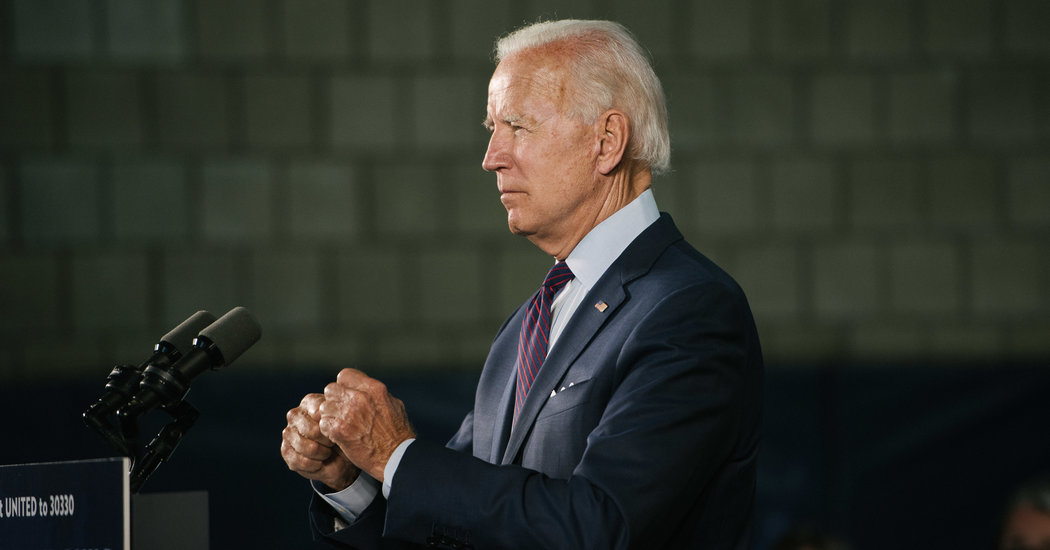 WILMINGTON, Del. — Joseph R. Biden Jr. on Tuesday will open a new round of attacks on President Trump and his handling of the coronavirus pandemic, assailing him for his continued failure to protect the American people from the virus, even as the number of new cases continues to surge in many parts of the country.

In a speech he is expected to deliver near his home in Wilmington, Del., Mr. Biden, the presumptive Democratic nominee, plans to say that Mr. Trump “has called himself a wartime president but is surrendering to the virus,” according to the Biden campaign.

“Americans social-distanced and did their part to bend the curve — but Trump didn’t lead,” the Biden campaign said, offering a preview of the address.

The campaign added that with infection rates rising, the president was “outright ignoring the crisis — golfing, holding rallies and telling a suffering country that he’s the victim.”

The campaign also released an updated plan for fighting the coronavirus, given “the current circumstances we face as a result of President Trump’s persistent failures.”

The plan said that “minutes after he is declared the winner of the election,” Mr. Biden would call Dr. Anthony S. Fauci, the nation’s top infectious disease expert, and ask him to work for Mr. Biden just as he has worked for past presidents.

“Dr. Fauci will have full access to the Oval Office and an uncensored platform to speak directly to the American people — whether delivering good news or bad,” the plan said.

Mr. Biden has made only sporadic in-person appearances since the pandemic upended Americans’ daily routines, and his campaign is refraining from holding rallies with large crowds that are typically a staple of the campaign trail.

He has repeatedly criticized Mr. Trump over his response to the crisis, and this month, he laid out an eight-part plan for reopening the economy.

In his remarks Tuesday, Mr. Biden will again discuss how he would do so, his campaign said. And Mr. Biden will walk through a timeline of specific moments of inaction by the president and explain what he could have done differently.

As of Tuesday, more than 126,000 people have died of the virus in the United States alone and more than 2.6 million people nationwide have been infected.

Mr. Biden’s latest planned remarks come less than a week after he delivered a separate speech in Lancaster, Pa., in which he excoriated Mr. Trump for, among other things, having said at a rally that he had ordered a slowdown of coronavirus testing.

Concerns over the pandemic response have also spilled into the ongoing and fractious debate over health care. Mr. Biden has sought to draw sharp contrasts between his desire to expand health care coverage, and the Trump administration’s legal effort to get the Affordable Care Act overturned.

Mr. Trump has staunchly defended his handling of the pandemic and has, at various times, claimed that the virus will fade away and that the spike in cases was a result of increased testing. He and his administration have insisted on reopening the economy rapidly, even as concerns about viral spread have persisted.

And the spike in cases in recent weeks in states like Florida, Texas and California has forced the political leaders of those states to pause their reopenings and close down businesses like bars that had previously been allowed to restart operations.

But a poll conducted this month by The New York Times and Siena College showed that seniors in battleground states — a key voting bloc that is both essential to the president’s re-election prospects and is most at risk of becoming seriously ill or dying because of the virus — disapprove of Mr. Trump’s handling of the pandemic by seven percentage points, 52 percent to 45 percent. Those voters overwhelmingly also said the federal government should prioritize containing the pandemic over reopening the economy.

Amid the pandemic, the country has also been gripped by a national reckoning over racial justice and inequality following the killing last month of George Floyd, a Black man who died after a white police officer knelt on his neck for nearly nine minutes.

Mr. Biden used what was his first formal speech out in public since mid-March to address racism and police brutality, warning Americans that “we cannot let our rage consume us” while lashing into Mr. Trump for turning the country “into a battlefield riven by old resentments and fresh fears.”