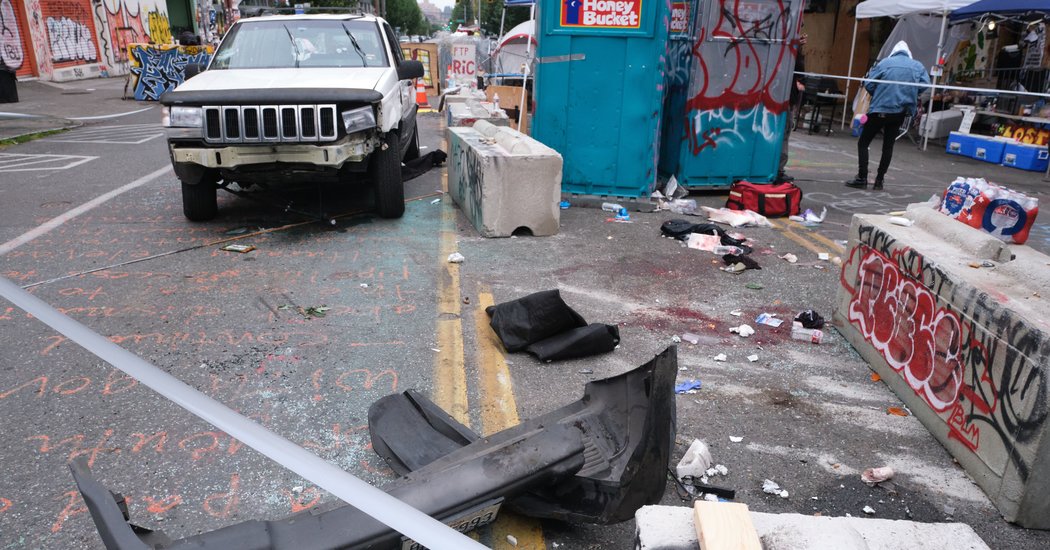 SEATTLE — Two teenagers have been shot, one fatally, in the fourth shooting in 10 days within the boundaries of the free-protest zone set up near downtown Seattle amid a national wave of protests over police violence.

The latest shooting, at about 3 a.m. on Monday, has accelerated tensions over what happens next in the protest area, known as the Capitol Hill Organized Protest zone, or CHOP.

One victim, age 16, arrived at Harborview Medical Center 3:30 a.m. from the CHOP area, transported there by Seattle Fire Department medics, and died in the hospital. The other victim, 14, was taken to the hospital in a private vehicle and remained in critical condition in intensive care, said a spokeswoman for Harborview.

The violence, with a total of six people shot in an area of the city known in the past as a party corner of Seattle, noted for its bars, restaurants and colorful student-infused street life, has raised new questions over what happens next.

The city has said it wants a return to normal in the occupied protest zone, and a reopening of the Police Department’s East Precinct, which was boarded up and abandoned as residents of the several-block area were left to police themselves. Work crews with heavy equipment arrived on Friday to begin taking down barriers that were set up by protesters after the killing of George Floyd in Minneapolis in late May. But work was halted to avoid a confrontation.

Mayor Jenny Durkan, a former United States attorney under President Obama, has been criticized from both the left and right for her handling of the protests and the situation in the CHOP in particular. At least three members of the nine-member City Council have called for her resignation over the police response to the protests, and President Trump tweeted that Seattle is out of control.

At least one lawsuit has been filed against the mayor and Gov. Jay Inslee, claiming that allowing the CHOP zone to emerge put people living in the area in danger. A crowd of protesters converged on the mayor’s house on Sunday, chanting for her to step down.

The second shooting occurred the next day. A 17-year-old boy who was shot was treated at Harborview Medical Center and released. Then two days later, the police said they were investigating yet another shooting in the early morning hours near the protest zone, with one person injured.

In a news briefing on Monday morning in the CHOP zone, Chief Carmen Best of the Seattle Police Department said that when the police arrived at the site after multiple 911 calls about gunfire, they found a white Jeep Cherokee “riddled with bullet holes” and were told that two men had been inside.

The investigation was immediately made more difficult, she said, by the fact that evidence had been compromised. “It is abundantly clear to our detectives, people had been in and out of the car after the shooting,” she said.

And so far, she said, residents and protesters who may have witnessed the shooting have not come forward. “People are not being cooperative with our requests for help,” she said.