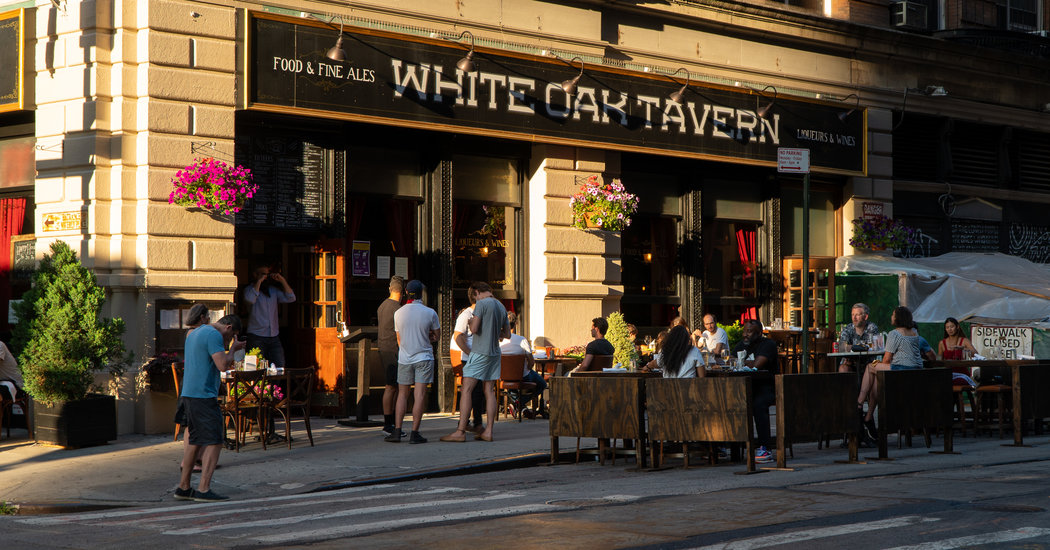 The governors of New York and New Jersey said on Monday that they were so alarmed by a surge in coronavirus cases in the South and West that they were reconsidering plans to allow indoor dining in the two states in the coming days.

Gov. Philip D. Murphy of New Jersey said that plans to allow indoor dining to resume on Thursday would be postponed “indefinitely.”

“We have seen spikes in other states driven in part by the return of patrons to indoor dining establishments, where they are seated and without face coverings for significant periods of time,” Mr. Murphy said. “We do not wish to see New Jersey experience a similar spike.”

New York City has been scheduled to enter Phase 3 of its reopening on July 6, which would have allowed restaurants and other establishments to serve patrons indoors if they cut their capacity in half and followed various other restrictions. Indoor dining is already allowed in the rest of the state under the conditions.

But at a news conference on Monday, Gov. Andrew M. Cuomo said that officials were now considering whether indoor dining could restart safely in the city and that he would make a decision on Wednesday.

The announcement by the governors stunned restaurant owners, whose businesses have been decimated by the pandemic. Many restaurants have been preparing to reopen by expanding their staffs and increasing inventory as they struggle to recover financially.

Amy Russo, the owner of three New Jersey restaurants named Toast was angry about Mr. Murphy’s shift, which came as she prepared to open her dining rooms in Asbury Park, Montclair and Red Bank.

Mr. Cuomo said he was worried about people from states with a high number of infections traveling to or through New York City.

“It’s not just indoor dining alone,” the governor said. “Indoor dining in New York City, where you already have issues with high congregations, you already have issues of people clearly violating social distancing, and you now have an added factor of viral spread all across the nation, and a high likelihood that those people will come to New York City. It’s that combination of facts that’s precarious.”

Mayor Bill de Blasio, speaking at a news briefing on Monday, said that indoor dining appeared to be a factor in states that were now experiencing a rush of new virus cases.

“The indoor dining element is now in question,” Mr. de Blasio said. “We’re going to work it through with the state, figure out how we want to approach it, if we want to pause that piece for a while or modify it.”

The reconsideration of whether to allow indoor dining was another sign that New York City is far from returning to normal. The theater industry said on Monday that Broadway would remain closed at least through the end of the year, and many producers have hinted that they do not expect their shows to be back onstage until late winter or early spring.

While New York, New Jersey, Connecticut and other Northeastern states have made substantial progress in stemming the outbreak, the virus is surging in states that were among the first to reopen, including Arizona, Florida, and Texas.

A number of outbreaks in those states and others have been tied to restaurants and bars.

Epidemiologists say that eating indoors poses a particularly high risk for transmitting the virus even if certain precautions — spacing out seats, making sure ventilation is adequate, ensuring that employees observe strict hygiene practices — are taken.

“As soon as you get into indoor dining, your mask comes off and you have the potential for aerosols to be generated not only from breathing and talking but also from eating,” said Krystal Pollitt, an assistant professor of epidemiology at the Yale School of Public Health. “It’s a higher-risk activity.”

In Michigan, more than 70 cases were linked to Harper’s Restaurant and Brewpub in East Lansing. In Alaska, the Seward Alehouse closed and encouraged customers to get tested after an employee contracted the virus.

Soaring case counts in Florida and Texas recently prompted governors in those states to order bars closed again. On Sunday, California officials ordered bars to close in some cities, including Los Angeles, and recommended that they close in others.

The New York City Hospitality Alliance, a business group that represents restaurants and bars, said in an email to its members on Monday that it had asked officials to make a decision on indoor dining quickly.

Many businesses, the alliance said, could not survive a short-lived reopening of some indoor dining if new outbreaks forced them to shut down again. State data showed that in March and April, dine-in restaurants in New York City eliminated more than 119,000 jobs.

“New York City restaurants and bars have been financially devastated,” the alliance said. “Our small businesses urgently need certainty and immediate support on rent, expanded outdoor dining and other responsive policies if they are to have any real chance of survival and recovery.”

Marilou Halvorsen, the president of the New Jersey Restaurant and Hospitality Association, a trade group, said that Mr. Murphy’s decision to postpone indoor dining would be financially devastating to many business owners.

In advance of the reopening, she said, restaurants had bought food and supplies and rehired staff members.

“We’re two days from reopening,” Ms. Halvorsen said. “We’ve had restaurants invest tens of thousands of dollars that they did not have.”

“Instead of addressing enforcement, which is what they should do, you’re going to take a sledgehammer to a whole industry?” Ms. Halvorsen said.

Stephen M. Sweeney, the State Senate president, said that for New Jersey’s casinos, which are scheduled to reopen on Thursday, the ability to serve food and drinks was a big part of the financial equation in welcoming customers again.

Now, gamblers will not have access to indoor restaurants or bars. At least one casino, the Borgata in Atlantic City, responded to Mr. Murphy’s announcement by saying it would remain closed until the governor “lets us know it is safe to offer food and beverage.”

“It’s not even workable,” Mr. Sweeney, a Democrat, said.