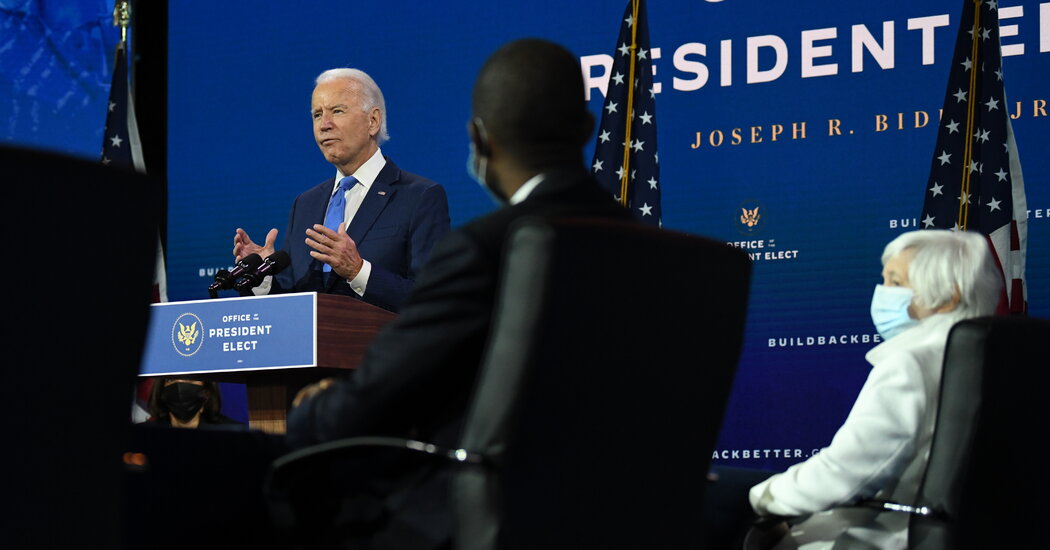 The country’s economy, like the nation’s politics, is queasily suspended between the Trump and Biden administrations — at a moment when the rampaging pandemic has prompted deep concerns over the strength, timing and even likelihood of a possible recovery next year.

On Tuesday, President-elect Joseph R. Biden Jr. tried to inject a sense of urgency — and stability — into a chaotic postelection environment by formally introducing his economic team, whose governing philosophy marks a stark departure from President Trump’s low-tax, low-regulation approach.

“Let’s begin the work to heal, to unite, to rebuild an economy for all Americans,” Mr. Biden said at an event in Wilmington, Del.

The new team, led by Mr. Biden’s pick for Treasury Secretary, Janet L. Yellen, the former Fed chair, will emphasize the need to immediately help households and businesses stay afloat amid the pandemic through the use of emergency appropriations and other forms of federal assistance, Biden aides have said.

During his remarks, Mr. Biden directly appealed to senators who will vote on the confirmations of his cabinet members and who are likely to oppose some of his picks.

“To the United States Senate, I hope those outstanding, these outstanding nominees receive a prompt hearing and that we will be able to work across the aisle in good faith and move forward as one country,” said Mr. Biden as he introduced his nominees including Neera Tanden, the combative head of a liberal think tank who is one choice likely to face some opposition.

Earlier in the day, current Federal Reserve Chair Jerome H. Powell backed that approach, warning Congress that “the outlook for the economy is extraordinarily uncertain” without an effort to bridge the dangerous transition by limiting the spread of the virus and supporting the economy.

Mr. Trump’s departing Treasury secretary, Steven Mnuchin, offered a much less dire assessment of the economy in his prepared remarks before the Senate Banking Committee.

But there were signs that the two sides were attempting to bridge the gap. Mr. Mnuchin told reporters he was planning to reach out to House Speaker Nancy Pelosi to discuss negotiations over another virus relief package.

A bipartisan group of senators, led by Susan Collins, a Republican of Maine, and Joe Manchin III, a Democrat from West Virginia, unveiled the blueprint for a $900 billion stopgap stimulus package later in the day.

The plan would provide $300 a week in federal unemployment benefits for 18 weeks, half of what Democrats have sought, and it includes $160 billion in funding for state and local governments, much less than the $500 billion Democrats had previously proposed, which congressional Republicans and the White House had firmly rejected.

In his testimony, Mr. Mnuchin proposed spending an additional $300 billion on relief — a move that was instantly attacked as insufficient by Democratic members of the panel.

“I continue to believe that a targeted fiscal package is the most appropriate federal response,” Mr. Mnuchin said on Tuesday. “The administration is standing ready to support Congress in this effort to help American workers and small businesses.”

Yet even as most congressional Republicans refuse to publicly acknowledge Mr. Biden’s victory, many in the party are starting to privately adjust to negotiating with a Biden team whose coordinated activity represents a sharp break from Mr. Mnuchin’s approach that had often involved back-room diplomacy with Democrats beyond the reach of his volatile boss.