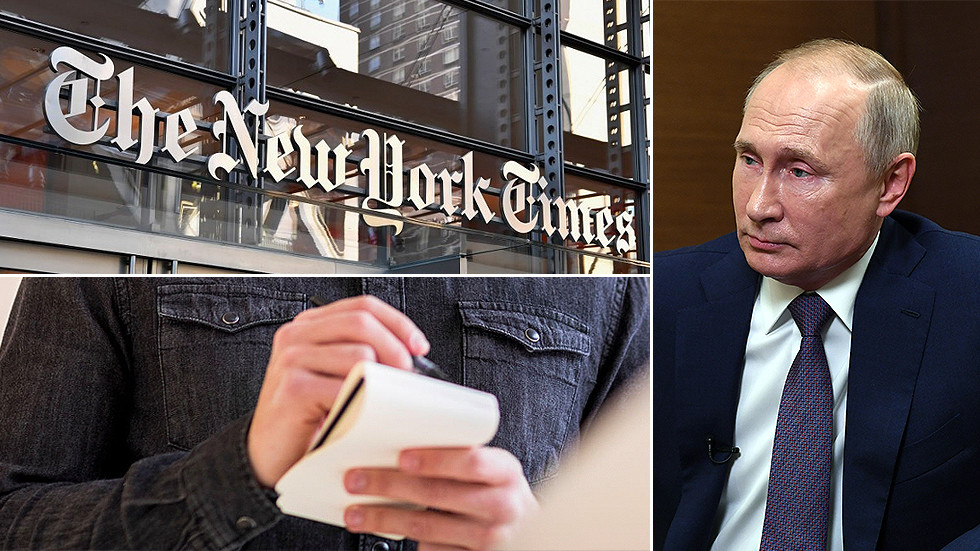 By Paul Robinson, a professor at the University of Ottawa. He writes about Russian and Soviet history, military history, and military ethics, and is author of the Irrussianality blog

All the propaganda that’s fit to print? The New York Times has taken the unusually honest step of admitting, in a job advert, that it has a predetermined biased narrative it wants its new Moscow correspondent to push about Russia.

Becoming a foreign correspondent for a major newspaper isn’t easy. Journalism schools are churning out huge numbers of wannabe Pulitzer Prize winners while the number of jobs is forever shrinking as the internet takes an ever greater toll on the media’s profits. Even a decent lower-end media position is tough to land nowadays. Thus, rising up to the top of the pile to grab one of the coveted overseas postings requires some talent.

Unsurprisingly, foreign correspondents are a smart bunch. They combine basic intelligence with an ability to tell stories in an engaging manner. Those who spend many years covering the same patch acquire an in-depth knowledge of their beat which others can only envy.

Yet all this isn’t sufficient to make a successful correspondent. Media companies are like any other institution, you don’t climb up the ladder unless you can please your bosses and fit comfortably within the organization’s ideological norms. There are, of course, exceptions, but one may safely assume that die-hard conservatives don’t flourish at the Guardian or socialists at Fox News.

Also on rt.com
Are you a fabulist who believes all sorts of myths about Russia? You might be in luck, because New York Times is hiring in Moscow


In an ideal world, editors would send their journalists off to far-flung places with instructions to report without prejudice whatever they found. In reality, they often have expectations as to what their subordinates will produce. As British reporter Nick Davies, a Guardian writer himself, pointed out in his book-length critique of the journalistic profession – Flat Earth News – at any point in time there is a ‘story’. Regardless of whether the story is true, editors feel that if they don’t follow it, they will lose readers or viewers, and so instruct their correspondents to report on it.

Consequently, journalists aren’t always free to pick and choose what they write about. If they want to get ahead, they have to follow the line. With time they may even believe it and follow it naturally, without much need for external guidance.

These editorial expectations are often implicit rather than explicit. But occasionally they come into the harsh light of day.  So it was this week when the New York Times issued an advertisement for a new Russia correspondent. The advert said:

“It sends out hit squads armed with nerve agents against its enemies, most recently the opposition leader Aleksei Navalny. It has its cyber agents sow chaos and disharmony in the West to tarnish its democratic systems, while promoting its faux version of democracy. It has deployed private military contractors around the globe to secretly spread its influence. At home, its hospitals are filling up fast with Covid patients as its president hides out in his villa.

If that sounds like a place you want to cover, then we have good news: We will have an opening for a new correspondent. … We are looking for someone who will embrace the prospect of traversing 11 time zones to track a populace that is growing increasingly frustrated with an economy dragged down by corruption, cronyism and excessive reliance on natural resources.”


Nobody reading this could have any doubt about what the editors of the New York Times expect of candidates for this post. Objective, balanced coverage of Russian realities is clearly not a priority. The chosen correspondent is to look at Russia in negative terms, as on the one hand a powerful and dangerous threat, and as on the other hand (somewhat paradoxically) a weak and decaying nation, undermined by a collapsing economy and corrupt government. This is the current ‘story’, and the lucky person who gets the job will be expected to follow it.

Putting aside the inaccuracies in the New York Times’s advertisement (Alexey Navalny is not ‘the opposition leader’) and the fact that much of what is said could be equally applied to the United States itself, the idea that there might be other angles of Russia worth exploring aren’t mentioned.

There’s no suggestion here that the winning candidate might wish to explore the remarkable improvements in Russian infrastructure in the past 20 years, the urban transformation visible in many (though far from all) major cities, the (imperfectly) competitive nature of some elections, nongovernmental organizations and opposition figures other than Alexey Navalny, Russia’s role as a peacekeeper in Nagorno-Karabakh, the positive relations the Russian Federation enjoys with many countries in the world, and so on and so forth.

Herein lies a clue as to why highly intelligent and knowledgeable journalists, once they arrive in Russia, all too often seem to lose their ability to think independently, and instead turn into clones, all reporting  the same negative stories using the same, very limited number of highly embittered (and often discredited) sources to pad out their text with suitable quotations. It’s what home office expects; and what home office expects, home office gets.


To convince candidates of the prestigious nature of the Russia correspondent position, the New York Times advertisement lists previous office holders – Bill Keller, Serge Schmemann, Hedrick Smith, Clifford Levy and Ellen Barry. The list curiously passes by the name of Walter Duranty, who was the New York Times’s Moscow bureau chief from 1922 to 1936 and who was described by a British contemporary as “the greatest liar I ever knew.”

Duranty’s embarrassingly inaccurate reports from the Soviet Union were later described in the New York Times as “some of the worst reporting to appear in this newspaper.” Duranty’s absence in the advertisement suggests that the paper’s editors know that their record isn’t as glowingly wonderful as they make it out to be.

The other names do, however, prove that it is possible to hold the job without unduly compromising oneself. Hedrick Smith particularly stands out. His 1976 book ‘The Russians’ broke new ground in going beyond stories of a totalitarian Soviet Union and in examining how ordinary Russians lived. Smith was far from uncritical of Soviet life, but at the same time portrayed it with remarkable sympathy and empathy.

Alas, both sympathy and empathy are in short supply at present. A wartime mentality appears to exist, in which some editors regard the media they control as weapons in the geostrategic battle. In this respect, the current situation is perhaps worse than in the 1970s, when Americans wanted to know and understand Russia and a work like Hedrick Smith’s ‘The Russians’ could leap straight to the top of the US book sales list. One cannot imagine the same happening today. Negativity is all that is required. The New York Times’s advertisement makes that absolutely clear.

The statements, views and opinions expressed in this column are solely those of the author and do not necessarily represent those of RT.