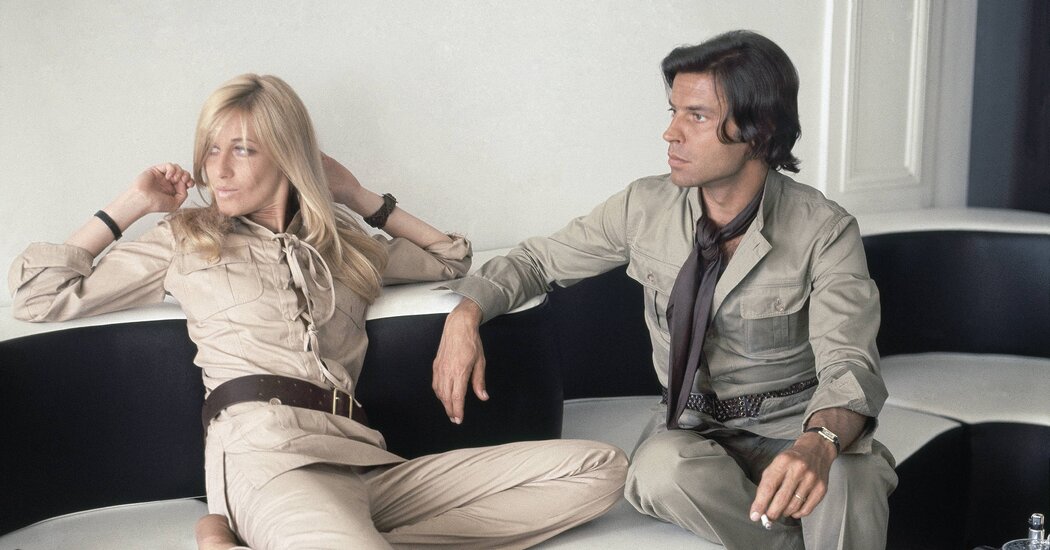 
François Catroux, a glamorous designer for the Rothschilds, Russian oligarchs, Greek and Arab princesses, fashion designers, media moguls and South American billionaires — what used to be known as the jet set — died on Nov. 8 in Paris. He was 83.

His death, in a hospital, was caused by a brain tumor, his wife, Betty Catroux, said.

Mr. Catroux was movie-star handsome with a perennial tan and a taste for expensive sports cars, the grandson of a noted French general and a Spanish heiress, and a high school friend of Yves Saint Laurent. Along with his wife, Ms. Catroux, the lanky androgyne beauty who was Mr. Saint Laurent’s muse and playmate, he was at the center of Paris’s glittering 1970s-era social scene, a complicated fantasia at which art, fashion and money collided.

Algerian-born and self-taught, Mr. Catroux had a sophisticated eye, and his first design job, in 1967, when he was 30, was for Mila Schön, a stalwart of Italian fashion. She asked him to design her showroom in a Milanese palazzo.

He turned it into a white laminate spaceship, Stanley Kubrick by way of Eero Saarinen, “a futuristic, minimalistic theater in the round for fashion — exactly right for the times,” the interior designer and writer David Netto wrote in a 2016 monograph about Mr. Catroux, “delivered by an ingénue, and it caused a sensation in the design world.”

So did the apartment Mr. Catroux shared with Ms. Catroux on the Quai de Béthune, a neo-futuristic playground made from vinyl, leather, plexiglass and steel. It was photographed by Horst P. Horst for Vogue in 1970, with the couple dressed, rather terrifyingly, in matching Saint Laurent khaki and sprawled on a vinyl banquette.

“My apartment happened during the French revolutionary year of 1968,” Mr. Catroux told Mr. Netto, “when everyone was against everything — and without knowing it myself, I was against everything too. Against things, so for two years I thought only of volumes and levels, without any furniture … cushions instead of a sofa, a cube for a coffee table … ”

“It was a boule de neige — it snowballed from there,” Mr. Catroux told James Reginato of Vanity Fair. “Voilà, my career started.”

François Philippe Frédéric Catroux was born on Dec. 5, 1936, in Mascara, in northern Algeria. His grandfather George Catroux was a French general and diplomat who joined Charles de Gaulle in the Free French movement during World War II and later served as a governor general of Algeria and minister for North Africa. Mr. Catroux’s father, André, managed the family’s properties in Mascara, which included a vineyard. His mother, Alphonsine Mallet, who was known as Sinette, was a homemaker.

Mr. Catroux described his family as “grand bourgeois,” their tastes, he said, running to lots of fake Louis XVI furniture that had already irritated him by age 5. François met Yves Saint Laurent at a Catholic boarding school in Oran, Algeria, where Yves, a day student, was bullied by their classmates. When they met later in Paris, as Mr. Catroux told Mr. Netto, they never spoke of their days at school together.

After serving in the French Army, Mr. Catroux worked as a location scout for Elle magazine. In 1963, he spent six months in New York City, where he met the decorator Billy Baldwin, the composer Cole Porter (whom he did not like, though he approved of his Waldorf Towers apartment), the architect Philip Johnson (who invited him to spend weekends at his Glass House in New Canaan, Conn.), the socialite Babe Paley and other midcentury society figures.

A decade later, he would return to Manhattan to work on apartments in Olympic Tower on Fifth Avenue, then a brand-new glassy high rise, for a Chilean tin baron named Antenor Patiño and for Helene Rochas, the French couturier.

Back home in France, Mr. Catroux would design a lodge for Baroness Marie-Hélène de Rothschild, a friend, on the grounds of her chateau outside Paris, as well as portions of the family’s Hôtel Lambert, mixing the storied Rothschild collections — the Dutch master paintings, 17th-century tapestries and 18th-century furniture — with his own modernist tastes.

For a television room, he sliced up 17th-century Verdure tapestries and used them to upholster the floors and the room’s lozenge-shaped mod ’70s sectional sofas.

Mr. Catroux’s clients were generational. The children of billionaires who had grown up in his houses in Paris, Greece or South America tended to hire him when they had their own. Mr. Catroux was still working — on a hotel in Cartagena, Colombia, among other international projects — when he learned he had cancer a few years ago.

“He looked like this Riviera playboy,” said Madison Cox, the garden designer and widower of Pierre Bergé, Mr. Saint Laurent’s partner, in a phone interview, “but he was also extremely hard working. He was able to project that kind of ease that comforted his clients. He had an innate sense of true luxury and well-made things, and he worked for people who strove for that, and he knew exactly how to produce it.”

For Diane von Furstenberg, a friend of five decades, and her husband, Barry Diller, he designed houses in Los Angeles and Connecticut, as well as their megayacht, Eos.

“He had that military side, so things were very precise and symmetrical; he liked things in pairs,” Ms. Von Furstenberg said in a phone interview. “But everything was very cozy, too — that very grand coziness, which was never pretentious, a luxury just for you, not to show off.”

In addition to his wife, Mr. Catroux is survived by their daughters, Maxime and Daphné, and two grandchildren.

Mr. Catroux met Ms. Catroux at a nightclub in Paris after she had the bartender send him a drink; she met Mr. Saint Laurent the same way, though in that case it was he who had sent her a drink. She often said that she was very clever in managing both men.

While Ms. Catroux and Mr. Saint Laurent careened in and out of trouble for decades — their shared benders and stints in rehabs were renowned — Mr. Catroux was at work every day, bright and early.

“The truth is, it was a huge love affair,” Mr. Netto said. “She was this mysterious person who could not be captured, and he was perfect for her because he didn’t need that from her. I think he just adored her cat power. He was devoted to her, and she set the terms.”

Said Mr. Cox, “They were like Adam and Eve, the eternal couple.”

Mr. Catroux told Mr. Reginato of Vanity Fair in 2016” “I knew she was the one for me immediately. If I missed this one, there was nobody else. I couldn’t miss this one. We’ve been together for 50 years. No regrets. But she’s not something … normal. She’s a special case.”

“I’m not interested in fashion, and I’m not interested in design, and I got the two geniuses on the subject,” she said in a phone interview. “I could live in an empty room as long as there was a bottle of wine and good music. But I know what’s beautiful. I was so lucky. It’s been a fairy tale life.”