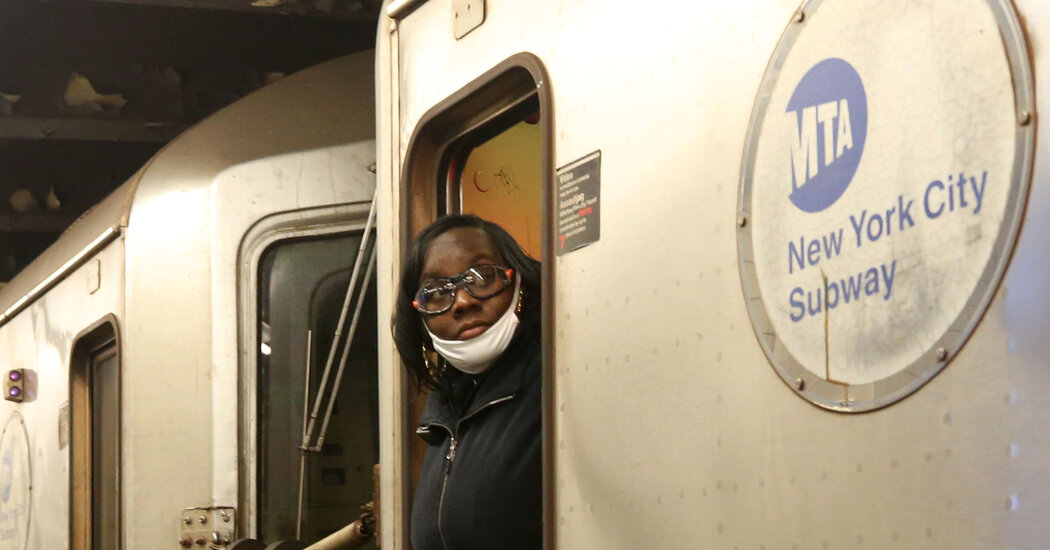 Weather: Much more pleasant: sunny, with a high around 60. Still warm and mostly sunny on Saturday; overcast and cooler on Sunday.

The coronavirus decimated the Metropolitan Transportation Authority’s ridership, the state and city are dealing with their own financial emergencies, and a second stimulus plan in the near future from Congress looks unlikely. Not to mention there is a looming Dec. 31 deadline to pass next year’s M.T.A. budget.

What’s left to do when faced with a worst-case scenario? Make deep, painful cuts.

On Wednesday, the agency laid out a proposal that could slash subway service by 40 percent, eliminate some bus routes and cut thousands of jobs if it doesn’t receive $12 billion in federal aid.

[Subway service could be cut if no federal aid arrives.]

Here are five takeaways on the M.T.A.’s doomsday plan:

A second wave of the virus will make matters worse.

Ridership has been stalled at 30 percent of pre-pandemic levels, as riders fear catching the virus while taking public transportation and have been working from home or choosing to drive. Though riding the subway may not be as risky as some New Yorkers believe, the M.T.A. has struggled to lure riders back on the trains.

Virus cases are increasing once again, and an effective vaccine might not be widely available until well into next year. Ridership may not reach 90 percent of pre-pandemic levels before 2024, according to the consulting giant McKinsey & Company.

“We’re going to have to match our service structure and service schedules to equal rider demand,” Robert Foran, the agency’s chief financial officer, said at the M.T.A. board meeting on Wednesday. “This is just ugly. This, though, is something we have to consider, you know, if we’re going to survive.”

With a divided Congress, the Biden administration may not be much help.

The M.T.A., which received a $4 billion bailout in an earlier stimulus bill, may not get more federal help if Republicans maintain control of the Senate. While President-elect Joseph R. Biden Jr. is an Amtrak enthusiast and public transit advocate, it’s unclear if Democrats and Republicans will strike a deal on another stimulus measure that includes significant funding for transit agencies.

“We are fighting very, very hard to get mass transit funding into the next Covid-relief bill,” Senator Chuck Schumer, a New York Democrat and the minority leader, told my colleague Christina Goldbaum.

Workers may rebel to ‘make their voices heard.’

Transit officials may cut 9,367 jobs from the transit work force. Union leaders warned that any large layoffs would provoke their members to respond with a work slowdown.

“The New York City Transit work force will correctly view this as the greatest betrayal of their careers,” said John Samuelsen, the international president of the Transit Workers Union. “There will be a rank-and-file rebellion, which will lead to chaos.”

M.T.A. cuts would ripple across the city’s economy.

The agency’s financial woes may be disastrous for the region as it recovers from the pandemic. Reduced service could hinder the ability of thousands of residents to commute to work.

The doomsday cuts could cost the region as many as 450,000 jobs by 2022, causing $50 billion in lost earnings, according to a report by the Rudin Center for Transportation at New York University and Appleseed, an economic analysis firm. About 25 percent of riders still using the system would ditch public transit if service was cut, according to the N.Y.U. analysis.

Slashing services may lead to a transit ‘death spiral.’

The cuts would happen about the same time as an already scheduled 4 percent fare increase in the spring. If the plan comes to fruition, riders may continue to avoid public transportation because of both unreliable service and pricier MetroCards, even when the virus subsides.

The city comptroller is suing the mayor over missing pandemic preparation files. [The City]

And finally: Your virtual social Friday

Although many performance spaces and community centers are closed, people are finding creative ways to connect through virtual events and programs. Here are three suggestions for maintaining a New York social life this evening while keeping a safe distance from other people.

At 6 p.m., learn about film history with Steve Massa, the author of “Slapstick Comedy: The Women of Silent Comedy.”

R.S.V.P. on the event page. Registration is free or by donation.

‘Beat of the Boroughs’

Join a discussion about the life of the dancer, drummer and singer Sidiki Conde at 5 p.m. The talk is part of the Center for Traditional Music and Dance’s sustaining cultures program, “Beat of the Boroughs: N.Y.C. Online.”

At 8 p.m., join Matthew “Fat Cat” Rivera, a D.J. and jazz historian, to learn about Louis Armstrong. The event will double as a listening party featuring a selection of rare 78-r.p.m. records of Armstrong’s music.

I invited a neighbor to join me on my daily walk around my Brooklyn neighborhood. I thought it would be a nice change to share my peaceful ritual of getting some vitamin D and fresh air with somebody else.

As we started out, she began to get irritated about the number of dogs she was seeing that were off leash. She didn’t like that.

“I’m getting a dog,” she announced, visibly unnerved.

We passed some trash piled on the sidewalk.

It was my least favorite street, but I was feeling protective.

Moments later, she said that something had bitten her finger.

I asked if she needed ice or water, or if she wanted to just go home.

As we continued walking, though, she began to wonder aloud about the possibility of anaphylactic shock.

After a few more blocks, she said she needed to use the bathroom and headed off.

My phone pinged before I got back to my building. It was a text message from her.

”Thanks for the walk, babe,” the message said. “I loved it! When can we go again?”

New York Today is published weekdays around 6 a.m. Sign up here to get it by email. You can also find it at nytoday.com.

We’re experimenting with the format of New York Today. What would you like to see more (or less) of? Post a comment or email us: nytoday@nytimes.com.