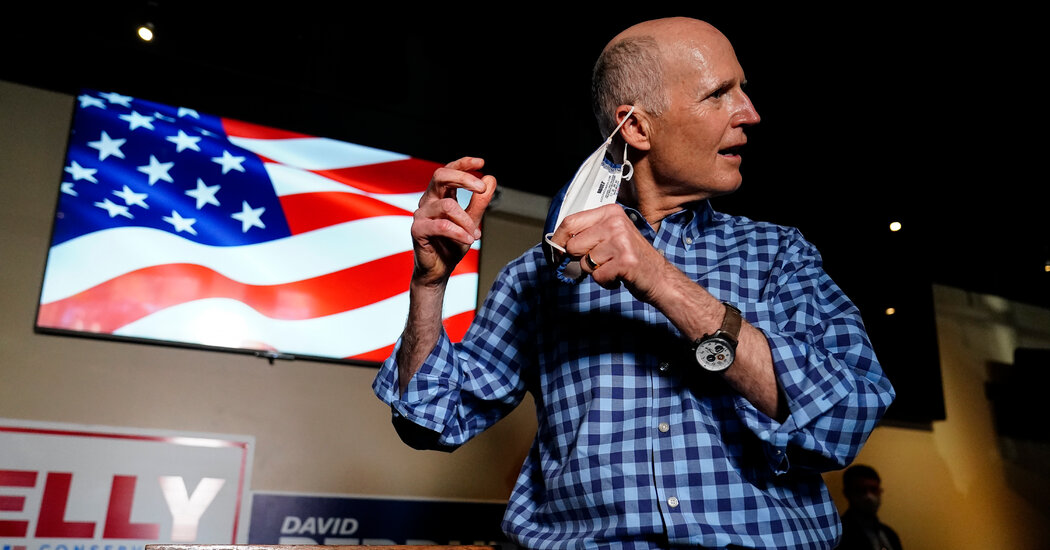 Senator Rick Scott, Republican of Florida, said Friday he had tested positive for the coronavirus, the latest prominent lawmaker to contract the rapidly spreading virus that has infected at least eight members of Congress over the past week.

Mr. Scott, 67, said he has been in quarantine at his home in Naples since last Friday, after he came into contact with someone in Florida who later tested positive for the virus. He said he took multiple rapid tests earlier in the week that came back negative, but a P.C.R. test he took Tuesday came back positive Friday.

P.C.R.-based tests are slower, but much more accurate than rapid tests, which are prone to missing the virus when it is present at only low levels in the body. It can also take several days after an exposure for someone to turn positive on a coronavirus test, even if they are already infected.

In a statement, Mr. Scott said he was “feeling good” and experiencing only “very mild symptoms.” He said he would work from home until it is safe to return to Washington. The Senate is not expected to resume work until the end of the month.

He encouraged Americans to wear masks, keep their distance from others and go into quarantine if they encounter someone who is positive for the virus.

“As we approach Thanksgiving, we know this holiday will be different this year,” he said. “But, listen to public health officials and follow their guidance. We will beat this together, but we all have to be responsible.”

Some months ago, Mr. Scott opposed a mask mandate but argued that everyone should choose to wear them. Like most lawmakers, he has taken off his mask when speaking at a microphone. In the past month, reporters at news conferences have started insisting that lawmakers keep their masks on.

Since Nov. 12, eight members of Congress — including two senators, Mr. Scott and Chuck Grassley of Iowa — have reported testing positive for the virus.

Mr. Grassley, 87, a Republican who announced that he had tested positive on Tuesday, wrote on Twitter on Wednesday that he remained “symptom free & in isolation.”

Members of the House who tested positive over the past week include six Republicans: Don Young, 87, of Alaska; Tim Walberg, 69, of Michigan; Dan Newhouse, 65, of Washington; and Doug Lamborn, 66, of Colorado; and two Democrats, Cheri Bustos, 59, of Illinois; Ed Perlmutter, 67, of Colorado.